MREs, Candy and the Black Market 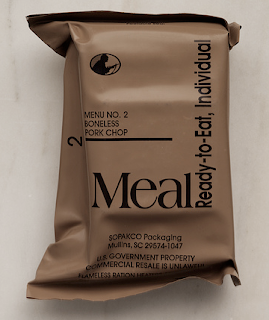 Let's talk about MREs. For the uninitiated, MREs (Meals Ready to Eat) are precooked prepackaged (in some cases, pre-chewed and digested) meals the army uses when they are in the field. You can buy them at Army Surplus stores if you'd like an example. They come in a heavy plastic brown bag and break down further into maybe 5-7 pouches, each a processed food item.Your typical MRE might have say... Italian Chicken with shell pasta. In addition to your entree, you get a small pouch of trail mix, an envelope of powdered electrolyte drink, a pouch containing a palm sized piece of wheat snack bread, a pouch of fortified cheese spread (with bacon) and a fig bar. Ideally, the MRE contains 1000-1300 calories to sustain soldiers in the field who are burning more calories, but with so many pouches of snackish foods the Basic training soldier typically turns quickly to economics and trade. 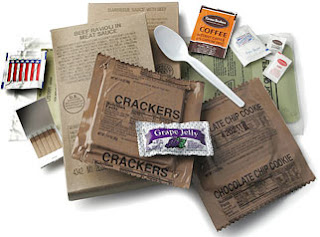 Allow me to back up a moment: In basic training one isn't given a lot of time or a lot of choice concerning food. Granted in the chow hall soldiers can select from as any as 5 entrees and side choices, not to mention an alright salad bar. However one typically has a mere 7 minutes to wolf down their food. This tension, combined with a logical lack of any and all junk food and a blanket ban on any food outside the chow hall (i.e. no between meal snacks) makes the typical BCT soldier somewhat edgy about his/her food. 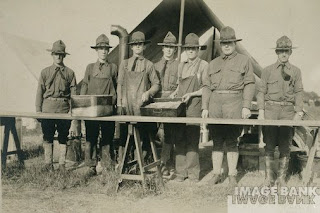 Back to MREs. Soldiers can get pretty picky about MREs even though we're not allowed to choose our own. It's a lottery with the lucky winning the popular choices (Beef Ravioli because it has stellar side items) and losers taking what's left (Tuna on pita bread because it's measly.) On top of that, and again, although it's ostensibly prohibited, there is a lively market for trading sides. Fortified peanut butter often trades slightly higher than it's counterpart cheese spreads (in plain, bacon or jalapeño) and Hooah Bars (like an Army Powerbar) run much higher than carrot pound cake but are roughly equal to mint chocolate brownies, which are pretty rare. The trading of entree items happens more rarely but it's not unheard of. Some soldiers go so far as to trade their entrees away for a pair of wheat snack breads and a fortified peanut butter, but this is rare as it will likely leave the trader somewhat hungary.

Now rarely but occasionally a package of M&Ms or Skittles will be inside a MRE. Some platoons are allowed to eat theirs in spite of aforementioned ban on junk food. In our platoon, however, we are not allowed. Sadly only the naive (like myself) ever really turn candy over to the drill sergeants. Part of the Gimbel tendency to rabidly avoid trouble, I suppose. Most soldiers who find candy secret it away under their body armor, into their briefs or, if they are foolish, into their pockets. Pockets are for the foolish because of the random contraband shakedowns that happen on occasion.

Yes many like to eat the candy but there is also a vigorous black market for goods of this nature. I have heard, for example, that a Snickers bar will go for about $8 and soda runs for about a dollar an ounce. Getting it is the tricky part because you have to know a private with PX privileges.

Anyway, all this explains why you guys have to curb the impulse I know you're all feeling to send me care packages fulll of crispy snack crackers, chewy cookies or scrummy fudge. Fight the impulse! Your letters will have to suffice. As soon as I get home you can bet that I'm gonna whip up a batch of fudgy brownies with walnuts first thing. Yum!

Hi Edward and Meridith. I found your blog through a comment Meridith made on Megan's blog. Soo... I liked this story about MRE's and the bit about "no junk food allowed" reminded me of a story. My dad went to the Air Force Academy and in his freshmen year had an assignment to serve in the food line one night. The dessert for the meal was Twinkies. Feeling like he never had enough sweets, he stuffed a few Twinkies (15 or 20?) here and there in his pants when no one was looking, you know.. to save for later. As he was walking back to his room looking quite suspicious (and with a slight waddle to his step) he ran into a senior. The senior, sensing something suspicious, ordered him to do 50 squat thrusts. Can you just imagine? Long story short, twinkie ooze... EVERYWHERE! So I hope Edward, you never hide sweets in your pants! Hope all is well!

Hahahaha! That is the best story ever. Hehe.

Stick it out, Edward! There is a land flowing with Reese's and root beer in your future.

Hey my name is drew and I was in basic two summers ago at ft. benning. Im doing a research paper on MRE food and I ran accross the story and thought it was funny. I wanted to stop by and say I actually got $1-2 a skittle! (like a solo piece) as well as other insane prices for my sweets.

A buck a Skittle? Yowza, too rich for my blood. Keep me posted on your paper, I'm always interested in hyper-specialized studies on sub-sub-subcultures.

Some of the coolest people ever...